West Wilts Equestrian Centre provided a great new Search for a Star venue for the qualifier on the 9th August. Judges, Richard Ramsay and Louise Gaunt were assisted by stewards, Helen Dunwell, John Foster and Craig McLelland. Entries were not as plentiful as at some of the earlier Search for a Star qualifiers, but the judges were impressed with the standard of horses coming forward to try for tickets to the prestigious Search for a Star Horse of the Year Show and Your Horse Live championships. The classes at West Wilts were all held in the outside arena, which was generally a popular choice with competitors, although it meant several competitors went home a bit damp!

Fell pony, Mosshey Centurion won the Mountain and Moorland, Your Horse Live qualifying class for his owner and rider, Georgia Norton. A delighted Georgia said: “I am just thrilled, I’ve only had him for a year. We got him just before lockdown which turned out to be a godsend. We have been to lots of clinics and training and learned lots together. I had always had plaited Arabs before Mosshey Centurion and the last one I had was a bit loopy so we decided on a change. I wanted something I could go and have fun on and do different things with. Mosshey Centurion has been reserve supreme champion at our local show and done arena eventing.” The pair headed to the Onley Search for a Star qualifier and took 4th place in the mountain and moorland, they have also been placed in the Search for a Star working pony class. Georgia added: “I work as a veterinary nursing assistant for small animals in a veterinary referral hospital, assisting with surgery which is fascinating. I am starting my veterinary nursing training in January. I was working as a veterinary assistant with horses, but this took away from my hobby so I switched to small animals which is working out brilliantly.” Hannah Sedgwick and her grey Connemara, Carrowkeel Storm took second place in the mountain and moorland class at West Wilts. Hannah said: “I am very pleased with her, this is the third mountain and moorland class we have competed in. When Storm was an unbroken five-year-old, she used to live next door to us, but kept on jumping in to our field. She kept on jumping in so in the end her old owner gifted her to me, over six-years-ago now. Carrowkeel Storm is very well bred, she has Western Duchess and Mountain Cascade bloodlines. She originally came from Ireland and her dam was a great jumping pony.” Hannah competes mainly in endurance with Storm. The pair have competed – and won - at up to 64km level. They were selected for the home international team at 64km and won their class. Hannah explained: “I went to a show with my sister and her youngster a while ago and liked it, so I decided that Storm and I would have a go too!” The veteran class was won by Desert Sea and his owner and rider, Dawn Bacchus. Desert Sea is an eighteen-year-old ex-racehorse and won £116,000 during his racing career for trainer David Arbuthnot. Dawn has had Desert Sea since he retired from the track as an eight-year-old. Dawn said: “We do plenty of showing and dressage, he competes at medium level dressage and is my absolute pet. We go off on lots of long hacks and have a great time. We also finished in 4th place in the Search for a Star riding horse hack qualifier this morning. I had another ex-racehorse, Amazola, that I competed in the Racehorse to Riding Horse HOYS final in 2009.” Dawn works as a lawyer for the National Trainers Federation – the trade association for racehorse trainers. 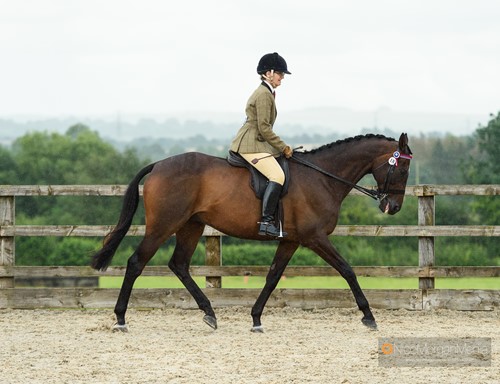 SEIB’s Marketing Manager, Nicolina MacKenzie said: “What a lovely day we had at West Wilts with super competitors who have been a joy to be around and given such lovely feedback, very different from some of the comments that we receive on social from those sitting in armchairs! Numbers are down this year but that appears to be across the board and something that is affecting most competitions across the UK. We understand how difficult it is to get back on the road after the pandemic and are so proud of the competitors that have been able to attend and the standards that they have managed to achieve. I believe the quality has been exceptional this year and every ticket has been hard fought, with so many competitors travelling from venue to venue to make their dreams come true. We delight every time we see someone who has taken the judges’ comments on board, kept trying, practicing and training, then have come back to finally quality.”

For all Search for a Star and Racehorse to Riding Horse information and to enter visit www.seib.co.uk/competitions.

Please note that all dates and venues could be subject to change.

Search for a Star qualifiers in the mountain and moorland classes, veteran horse or pony and part-bred traditional cob will head to Your Horse Live for their championships.

Leading equine Insurance brokers, SEIB Insurance Brokers set up Search for a Star over 20 years ago so they could offer a unique competition opportunity to many of their amateur rider customers. SEIB has a long association with the showing world and is renowned for ‘putting something back’ by supporting many equestrian events and activities in addition to Search for a Star.

In the meantime - if you need to insure your horse, horsebox, trailer, yard or business - SEIB are here to help so please give us a call on 01708 850000 or visit www.seib.co.uk. #SEIBhere2help